1
Raising Children in a World of Terror……for parents and grandparents! 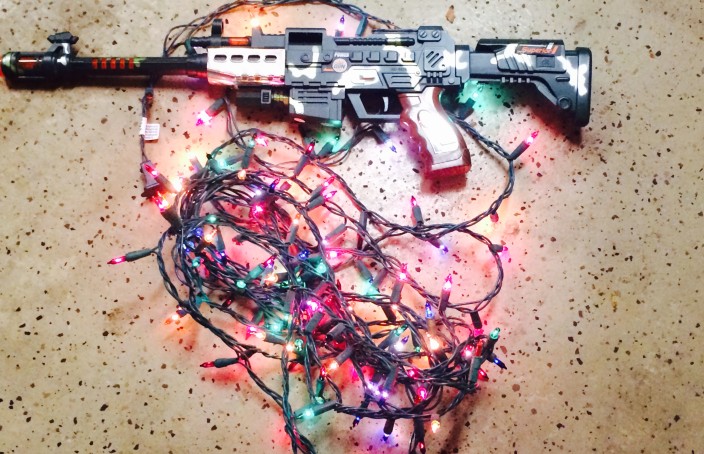 It was December 2001, Preacher was outside hanging up Christmas lights on a warm December afternoon in Georgia. The driveway was still wet from a short morning rain. I had just gone outside to encourage and thank him for working so hard to hang up our Christmas lights. Preacher hates doing things like this…..anything involving electricity or repairing something brings him much frustration because it usually ends up in some sort of disaster. This day would be no exception.

When I went outside he was already in frustration mode because he couldn’t figure out why some light bulbs were not working. He was barefoot on the wet pavement. I had on tennis shoes. As I was watching him, he picked up two exposed wires just about the time I leaned in to give him an encouraging kiss. Yep……….that is when I received the most electrifying kiss of our marriage.

About this time, 11 year old Trey ran out of the house in his camo with his BB gun ready to protect his parents who were lying on the pavement. Trey had heard me yelling, but thought I was screaming, “I’ve been shot. I’ve been shot.”

As funny as that story seems, Trey’s reaction to what he heard me scream came from the beginning of a new era in our nation……….raising children in the age of terror.

This generation and the ones to follow have become a part of a new era.  This era began with our children witnessing the fall of the twin towers, hurricanes destroy cities, tsunamis kill thousands, gunmen murder people in movie theatres, teenagers kill and wound fellow students in classrooms, terrorist kill those just trying to enjoy a cup of coffee. These children have seen it all in color on big screen TVs and on their IPADS and lap tops.

Our world is in desperate need of adults who are risk-takers for HIS KINGDOM!!! We don’t need a generation of adults who cling to mommy’s apron and are afraid to take risks because of fear.